Hi there. It’s been a bit, hasn’t it? It feels like it, anyway. I try to put out a post a week, but sometimes some part of the journey takes me somewhere else. First, we played ‘ring around the head cold,’ with the kids picking up and passing along one after another. I finally succumbed last week, with a less than pleasant combination of tongue swelling, sore throat, congestion and overall zombie-brain hitting me.

Then there was this… 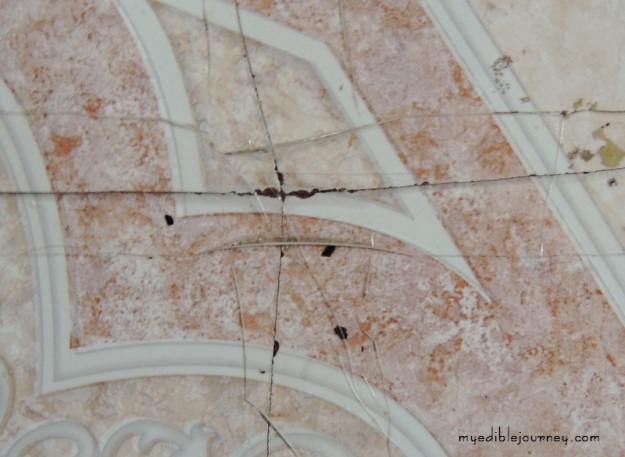 When we bought this house just over 5 years ago, we knew the kitchen needed major work. The tile floor was poorly laid. We suspect it was done not long before the house went on the market. How they thought it was an improvement is beyond me. It cracked underfoot and barely stuck to the underlay. We were holding it together with packing tape in some places. 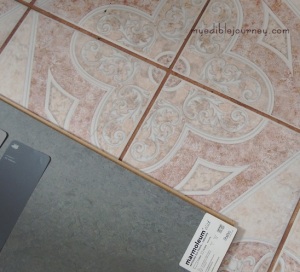 We decided that this year would be the year to replace it. I looked into a product called Marmoleum Click, and really liked what I read.  We chose a colour called “Eternity,” which is a dark grey with a slight blue cast. Since I want to use shades of white and grey in the kitchen (which is currently shades of UGLY), it’s perfect. And when we ordered it, we found out that it’s gone on sale since we originally priced it out. Bonus!

So since the weather has been crap (cold, wet, cold – we saw snow this weekend!), hubby decided that it was time to get cracking. The tile was so poorly laid that we figured it wouldn’t take much to get it all up. My father and father in law came by and the three men set to work. 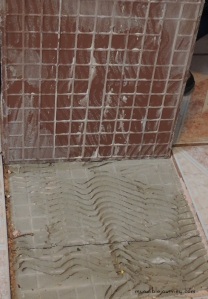 It seems as though the people who originally put this tile down spread the thinset mortar over the whole floor and began tiling. By the time they laid the middle tiles, the goo was dry, and the tiles never really adhered to the wood below. But that didn’t make things a lot easier, because under the tile (and mortar) was a crappy subfloor, which was on top of two layers of peel and stick vinyl tile and another thin layer of plywood. We left that, but the rest had to come up. With, as my husband says, “brute force and ignorance.” The dust flew, tile shards went everywhere, noise levels rose, and what should have taken a day is into day three. But the new sub-floor is finally going down. Honestly it was a decent distraction from the reminders on Twitter that I wasn’t enjoying myself at the first ever Food Bloggers of Canada conference. 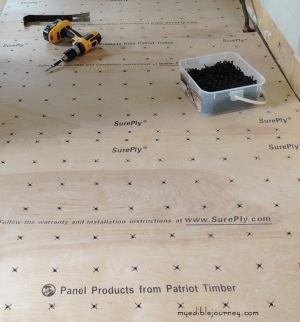 The new flooring won’t be in the store for a week or so. That’s fine. It gives me time to at least breathe, cook in my own kitchen again and relax a little. Keeping the kids from getting underfoot, while honouring their desire to “help,” as the sounds of demolition ring through the air, is stressful. Thankfully the floor can be laid with the minimum of disruption.

Next year we may tackle the tiled walls (you read that right), cabinets and counters. *shudder* 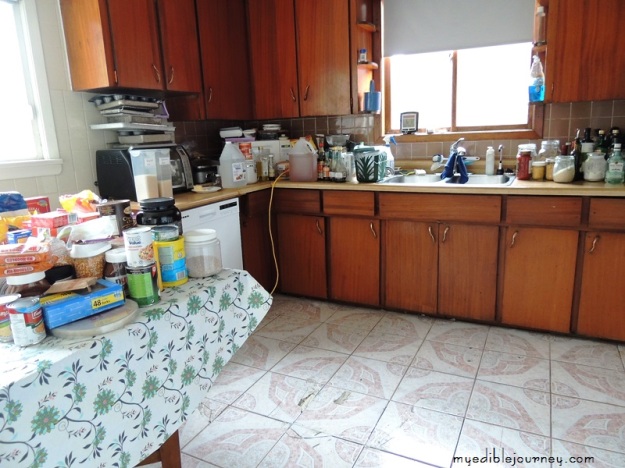 Yep, this is my kitchen (with pantry contents everywhere). Isn’t it lovely?

2 thoughts on “We interrupt this blog”

Because we wanted pizza, but aren’t filled with enough self-loathing to order in on Super Bowl Sunday, I prepped dough yesterday and we made our own for supper. This is mine. Homemade dough & tomato sauce with fresh basil and garlic (I added habanero hot sauce to mine) topped with mozzarella and smoked Gouda, home roasted red peppers from last summer, red onion, pickled jalapeños and crispy fried speck. Can’t get that from a take out joint. 👍🏻
The resulting breakfast. I will say that even on low, I had a little scorching in my small crockpot. But nothing too bad. I sprinkled this with a little more brown sugar and cinnamon.
It isn’t terribly photogenic at the moment, but in the morning this little slow cooker of pot barley, milk, cinnamon, nutmeg and raisins will be a warming breakfast. . . . 1 cup barley 4 cups milk 1/2 tsp salt 1 tbsp brown sugar (optional) Spices to taste Dried fruit optional . Slow cook on low all night.
If you’ve got younger kids, these books would be a lovely addition to their library. @matthewpaulturner is a wonderful author & his books are delightful.
Baked up some oversized dark chocolate chunk cookies, largely to heat the kitchen LOL. The recipe is from @taraobrady. The ones on the right baked for 15 minutes. On the left got 13. So... 14 minutes the next time. 👍🏻
Baked up some whole wheat honey knots today. Used buckwheat honey and a starter that I made last night. They’re fluffy, with a nice crumb.