What season is it?

I know, I know, cranberries are the sauce fruit of the season.  Apples are so… autumn.  Well, it technically IS still autumn.  But it’s the best part of autumn.  The part where apples are still bountiful, but so are other treasures, like nuts.

So far this season we’ve had heartnuts, butternuts, black walnuts and chestnuts.  I also cracked open a tin of store bought salted mixed nuts, tossed them in a hot pan with maple syrup and cinnamon until they became caramelized, sweet goodness and took them to a girlfriend’s house to nibble while we watched White Christmas.  So good!  And pseudo-healthy.

I’ve been playing with the flavour of brown butter lately (did you see my brown butter biscotti?)  The nutty flavour pairs so well with many things.  It isn’t difficult to make.  Melt the butter over medium heat.  Let it foam up.  Once the foam begins to subside, keep an eye on it.  It will foam again.  Watch for it to start changing colour.  Swirl it around a bit.  When it smells nutty, pour it into a waiting bowl to stop it from burning. 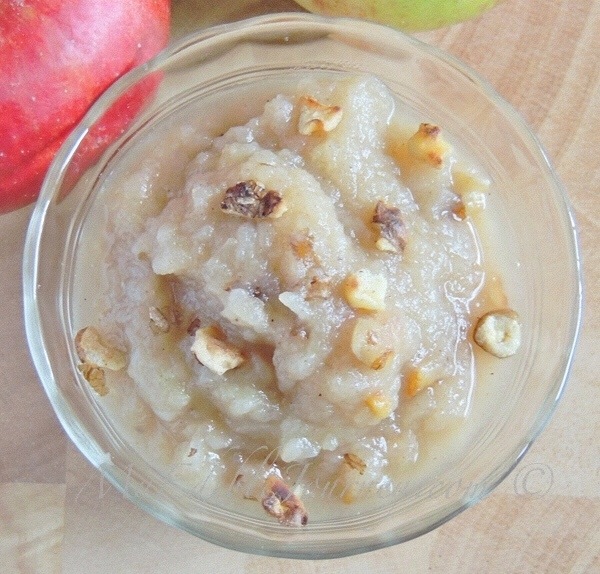 Warm the applesauce slightly in a small saucepan and pour in the brown butter. Add the remaining ingredients, but go easy on the spices, tasting as you go. *I used nutmeg and cinnamon, but you could use ginger, cloves or allspice, too. Remove from the heat and stir in the nuts and brandy, if you’re using it. Refrigerate until ready to serve.

This is great with game birds, like duck or goose, ham and pork roast (of course) or stirred into yogurt or oatmeal or even dolloped atop potato pancakes or ice cream.  It will also freeze well.