Wow, has it been cold.  We haven’t seen cold like this in years.  We saw -30C (-22 in American measures) with the windchill yesterday.  And that was the HIGH temperature!  We had a reprieve on the weekend, hovering around the freezing mark, but the wind was still bitter.  And this weekend promises to be milder, but very wet.  It’s time for chili.

A twist on an old favourite

Growing up, my mother made chili often.  Hers was a long-simmered brew of ground beef, tomatoes and beans, with ample seasoning.  Since my father didn’t eat it, she would make it spicy.  It had a balance of sweet, tangy and savoury that was perfect for scooping up with heavily buttered white sandwich bread. 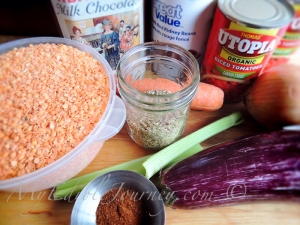 My son doesn’t care for ground meat.  But he likes chili.  So I had to improvise.  Standing in for the texture of the ground beef is bulgur wheat, added in the last hour or so.  Cubed eggplant also lends a meaty mouth feel.  Lentils and beans help provide the protein and iron, and the rest is pretty much based on my mother’s recipe.  She always used tomato soup, a little brown sugar and some white vinegar in her chili, and I do as well.  I also add cocoa powder, to add depth to both the flavour and colour.  Beef broth and Worcestershire sauce give it a long-simmered taste, since I’m often not making this first thing in the morning.

I call this “veggie chili” rather than vegetarian because obviously I use ingredients in mine that disqualify it from carrying that designation.  You can certainly make yours completely vegetarian and I’m sure it will be just as good.  Play with the flavours.  Sometimes I add diced zucchini along with the eggplant.  I don’t like peppers in mine, as I think they tend to take over, but if you’re a fan of them, add them with the onions.  I’ve even heard of star anise being added to chili to bump up the umami taste.  If you want to use a crockpot, be sure to soften all of the veggies in a pot first.  I’ve found that they don’t always soften otherwise.  And don’t add the broth, since there won’t really be any evaporation.

This is another “no-recipe” recipe.  The amounts are limited only by the size of  your pot.  Here are the basics.